Systolic and diastolic currents of injury

Why and How myocardial ischemia causes the ST segment changes?

Did you ask yourself this question before?

To answer such a question you need to go back to the physiological basics of electrocardiography. You must remeber that the ECG is the surface recording of electrical changes caused by electrical activity of the heart. At the culluar level those electrical changes are known as the action potential, which represents the potential differences across the cellular membrane as a result of a proper stimulus. The ischemia causes less negative resting membrane potential and loewr amplitude and longer duration of the action potential.

The ischemia is affecting a localized area and the rest of the myocardium is healthy and has normal action potential. This generates an electrical difference between the ischemic myocardium and the nearby healthy myocardium. 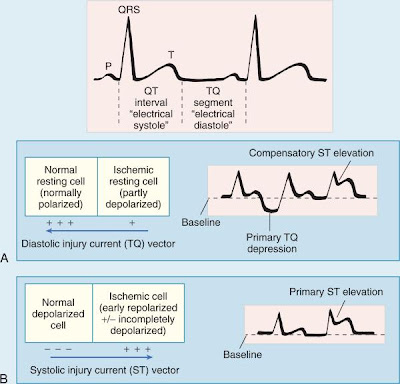 Images are from Braunwald's Heart Disease: A Textbook of Cardiovascular Medicine, 8th ed.
Posted by Cardiology Man at 4:18 PM